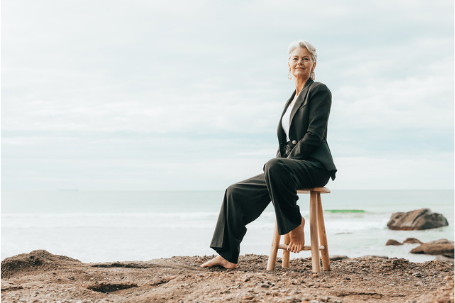 The middle path is the way to wisdom.

Clive Palmer on the ABC TV program ‘The Big Deal’ defended spending $83 million on the last election by saying with a smirk: ‘I achieved what I wanted – a polarised community’.

It was a chilling remark that reminded me of what power (money) can do in the hands of the unwise.

I was also left wondering why it would be an advantage for someone like Palmer to have a polarised divided society?  What do you think?

We know that the believing brain network cannot work in conjunction with the curious, questioning network.

When a population is polarised, there is a lack of curiosity and a lack of kindness towards those on the other side of how we see things.  It all becomes positional; it becomes about belief or ‘truth’ and the others not understanding or being stupid.  The next step could be justifying their suffering.  Just last week I heard two examples of people wishing that ‘anti-vaxers’ would ‘just die’.

From a political perspective, I imagine that polarisation is an advantage as you have your loyal support base irrespective of what you do as a politician. Their focus is on the faults of the opposing side. And with fewer swinging voters there is less subject-based discussion and critical questions are scarce.

You might ask what this has to do with Mindfulness?  Well, at the core of Buddhism is curiosity and not believing in anything – including Buddhism!  That alone is why I appreciate it so much.

Secondly, there is within Buddhism a focus on The Middle Way, which is the opposite of polarisation.  Why the Middle Way?  Because it is wise.  When we believe without reason, without having investigated or being open to investigating, we become easy to manipulate.

Part of the polarisation process is labelling.  Hitler used this technique to generalise about and scapegoat Jews – a process known as ‘othering’. Now, those who have concerns about the Pfizer vaccination, for instance, have been labelled ‘anti-vaxers’. And those who, without questioning, have had the jab have been labelled ‘sheeple’ (mindless sheep). This is an example of polarisation and it is not helpful.

And let’s remember history proves that authorities and the majority are not always right.  Remember thalidomide? Remember that it took twenty years for pregnant women not to be subjected to X-rays in spite of proof that it was harmful? Remember how much the smoking lobby spent trying to convince us that smoking was not bad? I was a child involved through my parents in lobbying against passive smoking.  It was a nasty ‘war’ with smear campaigns and the promotion of false research findings, all while millions were dying as a result of both passive and active smoking.  Both of my grandparents illustrate this.

Having been through that, I probably have less faith than some in the voice of authority.

I see that on the one hand, we have a company that has managed to get the largest criminal fine ever in the history of the planet for their unethical behaviour – Pfizer.   In 2009 the company was fined $2.3 billion under the False Claims Act. It was estimated that they would make $33.5 billion during 2021 from sales of the vaccine. Even extending to them the largest amount of goodwill, common sense would counsel us to be vigilant in how we respond to them and their research when we are asking that all bodies be subjected to their jab and when we are talking about that huge transfer of public funds to a private company.

And right now, in spite of very high numbers of the double- vaxed we have in Denmark, for instance, numbers again sky rocketing, so perhaps the vaccine was not the solution we were originally promised on the basis of 90% protection with no talk of boosters.

On the other hand, we have a problem with COVID 19, a serious problem.  Particularly the older population, the obese and those with co-morbidity are very vulnerable to this disease, both the original COVID 19 and the Delta variant.  We have huge death tolls, particularly in some countries. This is a huge challenge for humanity.

Polarisation also means collapsed arguments.  Those who are hesitant to get vaccinated are labelled ‘anti-vaxers’ yet most have had other vaccinations. They just have concerns with this one. Those who do not get vaccinated are thought to be anti-social, responsible for possible deaths and keeping our society in lockdown. Yet questioning and being hesitant could, from another viewpoint, be seen as the most democratic behaviour. Those who get the jab, on the other hand, have been labelled ‘good Australians’.

Politicians and the media have pitched us against each other, leaving us less able to have a good dialogue, less able to soothe each other with good reason and common sense, less able to question the intentions and data of anyone be that relating to the Pfizer vaccine on the one hand or Ivermectin on the other.

Through questioning, through kind curiosity, we connect as humans, we share our experience of fear or concern.  But we are also able, from this place, to demand accountability rather than making excuses or dismissing voices not aligned with our own.  Indeed, this is essential if we are to question the interests of huge business with any sort of clout.

The same principle of living and being in The Middle Way plays out in all areas of our lives.  When it comes to dieting, it finds the bridge between over-indulging and extreme restriction.  When it comes to working, it offers balance between workplace demands and family life.

Sometimes the extreme has been normalised, as in the case of racism or sexism, or the Anthropocene perspective, where we are missing the big picture of being just a part of this planet, and a temporary visitor.

No other debate in history has been so derailed and sabotaged by polarisation as that regarding climate change. Polarisation in the interest of big business has repeatedly blocked the very simple but profound act of taking responsibility for the state of the planet.

Instead of making others right or wrong, or bottling up right and wrong in ourselves, there’s a middle way, a very powerful middle way… Could we have no agenda when we walk into a room with another person, not know what to say, not make that person wrong or right? Could we see, hear, feel other people as they really are? It is powerful to practice this way… true communication can happen only in that open space.

Let’s hope that polarisation can be seen for what it is – the most unhelpful and unwise way of navigating life which leads only to stagnation, hatred and dysfunction.

When many years ago I studied ancient history and Latin I learnt that Cato finished all of his speeches in the Roman Senate, regardless of the topic, with the exhortation: ‘Furthermore, I consider that Carthage must be destroyed.’

Inspired by this, I am going to finish each newsletter with one point. Given what we have learnt over the past 5-10 years about the brain, it is reasonable to act on some of these findings. I therefore propose that before people enter into important jobs that affect many people, like politics, they need to have a brain scan checking for whether empathy is on line, whether long-term thinking and perspective-taking is likely, while ensuring that they are neither sociopaths nor narcissists. They would then have a choice to engage in some activities to improve brain functioning in order to be prepared for the job or to pursue career goals elsewhere. (And maintenance would also be required.)

And so I conclude: ‘Furthermore, I consider that brain scanning of people seeking power should be mandatory.’